Today we are excited to be releasing a major software improvement designed to greatly enhance the user experience for our VX1 users. A whole new Graphical User Interface has been designed for the VX1 touch screen that allows the user to quickly move through applications and media as well as download new media packs when they become available and makes software management easy. The next time Voxon has a cool demo, volumetric video or new game that we would love to share, we will now be able to make this available for download for everyone easily.

The Voxon Software Installer has been designed as a single .msi file (windows installer) that will install the Developers Kit on a PC (for both hardware owners and non hardware owners) and the new Vertex on Voxon hardware such as the VX1. 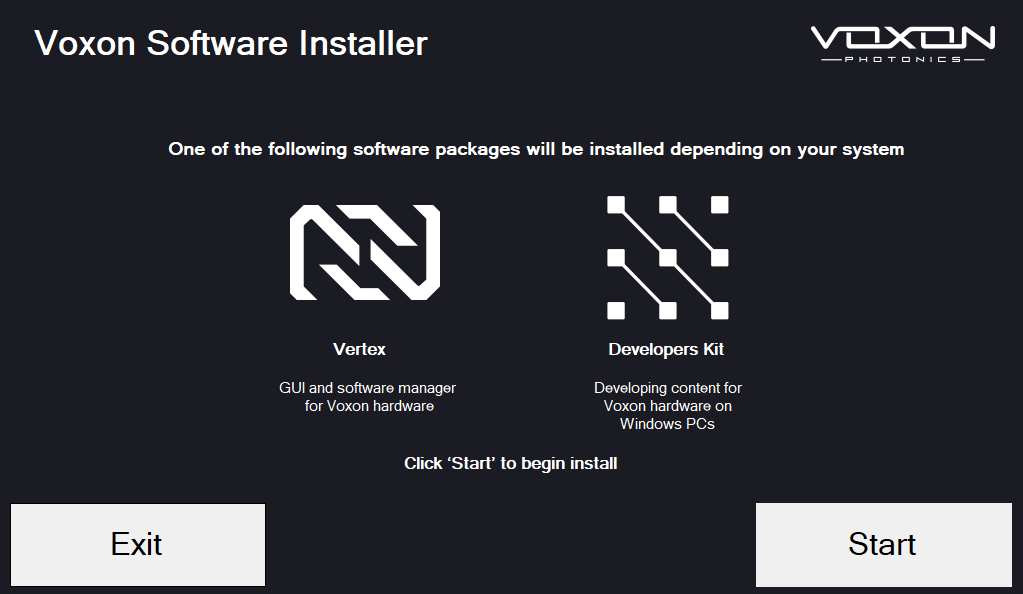 All Voxon software is now managed by one installer. The Voxon Software Installer installs different software depending on the system. On a standard Windows machine the installer installs the Developer Kit giving the user access to the tools and support materials to create their own content. Running the installer on Voxon hardware will install our new graphical user interface, Vertex.

Formerly known as our Software Development Kit. Our new Developers Kit is more streamlined towards any development for Voxon hardware. We have curated a whole bunch of useful content to assist developers to make the most of the box.

Our Developers Kit contains the same VoxieBox.dll that all Voxon hardware uses to display it’s technology. The VoxieBox.dll can run in simulation mode making so any developer can see how their content would look on Voxon hardware on a traditional 2D screen. The simulator is a powerful tool and almost identical to the hardware.

Our Unity plugin is more stable and robust than ever with many new enhancements and example scenes. For developers interested in using the VoxonAPI natively we now include over 20 example C programs. For users of Visual Studio 2017 there is a C++ template. For those more interested in 3d modeling there are also examples for developing codeless 3d animations. There are a handful of new tools and assistant programs included too.

For those wishing to contribute to the development kit or those who want the very latest we have hosted our Developers Kit on github.

We are very excited about this new overhaul and can’t wait to see what the community creates with this new kit.

This first version of Vertex downloads software and updates from the cloud. Vertex manages your media and software libraries, easily adjusts display settings all by use of the touch screen.

More features, including an app store to come.

In conclusion we believe that this new interface will make it so much simpler to manage the software on the VX1 and when we, or one of our partners, have amazing things to share then we can make those easily available for everyone. Any questions, just contact us using the button below. Enjoy!